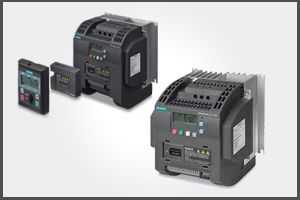 SINAMICS V20, the basic performance AC drive, Siemens offers a simple and cost-effective drive solution for these types of applications. SINAMICS V20 sets itself apart with its quick commissioning times, ease of operation, robustness and cost-efficiency. With four frame sizes, SINAMICS V20 covers a power range extending from 0.12 kW up to 15 kW (1/6 hp up to 20 hp). We are Authorized Distributer for SINAMICS V20 Drives .

The Sinamics V20 comes in four frame sizes covering the performance range from 1/6–20hp and is used to operate pumps, fans, compressors and conveyor systems, and is also used for simple drive tasks in the processing and handling industries. This compact drive can be connected directly in-line and mounted as a push-through installation in addition to the conventional wall-mounting method. Operation of the new Sinamics V20 drive is just as easy as its commissioning.

The Keep Running Mode automatically adapts the Sinamics V20 drive to the power supply to achieve higher availability when operated on unstable networks. In this mode, line fluctuations are compensated for internally and error messages are acknowledged autonomously. Due to the enhanced cooling concept and coated PCBs and electronic components, the Sinamics V20 is extremely rugged, both electrically and mechanically, making the unit reliable even in harsh environments.